Trends That Matter for Prevention of HAE Attacks

When the FDA approved BioCryst Pharmaceuticals, Inc.'s Orladeyo (berotralstat) in December 2020, the drug became the first oral treatment for prophylaxis to prevent hereditary angioedema (HAE) attacks, AIS Health reported. According to Zitter Insights, payers with nearly three-quarters of covered lives plan to manage it at parity to other prophylactic treatments.

The FDA approved the first drug to treat HAE, Shire plc's Cinryze (C1 esterase inhibitor [human]), on Oct. 10, 2008. Since then, the FDA has approved eight drugs to treat HAE: half for acute attacks and half for prophylaxis.
Orladeyo will compete against Cinryze, Haegarda (C1 esterase inhibitor [human]) and Takhzyro (lanadelumab-flyo) to prevent HAE attacks.

For the Managed Care Biologics and Injectables Index: Q1 2020, between Feb. 25, 2020, and April 1, 2020, Zitter surveyed 51 commercial payers with 138.1 million covered lives about their anticipated management of Orladeyo. Payers covering 93% of lives said they likely would manage it to label and not allow off-label use.

Among providers who would transition current patients to Orladeyo, the most likely prophylactic agent to transfer from was Cinryze, cited by 42%; followed by Haegarda, at 25%; and Takhzyro at 8%. 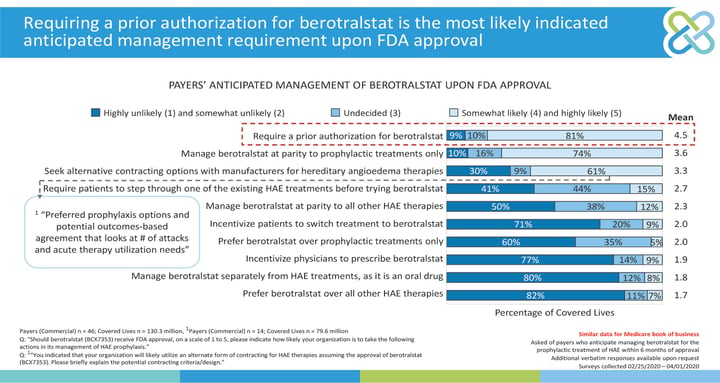