CVS Health Corp.'s Caremark will exclude 57 medications from its 2021 formulary and add six back. Meanwhile, UnitedHealth Group’s OptumRx subsidiary will exclude 19 medications and products while adding back five and implementing restrictions on others, AIS Health reported.

Still, only a handful of products excluded by either PBM are likely to impact many members adversely, says Marc Guieb, a pharmacist and consultant with Milliman Inc. That also applies to the exclusions announced earlier by Cigna Corp.-owned PBM Express Scripts, he adds.
Guieb observes that brand-name albuterol inhalers are seeing exclusions in 2021 from multiple PBMs, and that's the change that will affect the most members. "That's a big one this year," he says. "One of the PBMs' new strategies is, they're completely excluding all the brands of albuterol inhalers, and they're just going with the generic."

Meanwhile, "the change that will actually cause the most widespread disruption and confusion will be diabetics switching to entirely new blood glucose monitoring systems, which is a hassle," Guieb says.
PBMs that decide to prefer one specialty drug over another also can cause significant member disruption, Guieb adds, pointing to potential issues involving Novartis Pharmaceuticals Corp.'s biologic Cosentyx (secukinumab), which was excluded from Express Scripts' 2021 formulary in favor of Eli Lilly and Co.'s Taltz (ixekizumab).

For 2021, OptumRx is changing up its multiple sclerosis coverage, adding Biogen's Tecfidera (dimethyl fumarate) to its excluded list and preferring bioequivalent Bafiertam, made by Banner Life Sciences. Biogen's Vumerity (diroximel fumarate) remains excluded.
Graphics below list medications that will be excluded by two or three major PBMs and their current market access among commercial formularies under the pharmacy benefit. 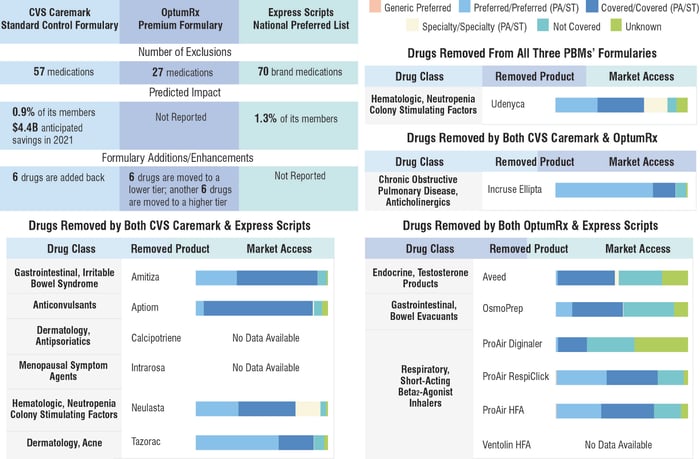