When the FDA approved Novo Nordisk, Inc.'s Sogroya (somapacitan-beco) for the replacement of growth hormone in adults with growth hormone deficiency on Aug. 28, it became the only long-acting agent on the market, AIS Health reported.

There are seven short-acting growth hormones currently available to treat adults with growth hormone deficiency, all of them branded forms of somatropin. Differences among the products, all of which are self-administered, include the strengths available and the type of device to deliver the treatment. But all of them must be administered daily. Sogroya, which also is self-administered, is the only FDA-approved product with weekly dosing.
Mesfin Tegenu, R.Ph., president of PerformRx, LLC, points out that Sogroya "is a human growth hormone (hGH) analog — an hGH with an added albumin-binding moiety. Up until this point, all hGH products have been a recombinant product, identical copies of hGH (rhGH). The half-life of somapacitan is measured in days (two to three days) while the half-life of rhGH (somatropin) is measured in hours (approximately two-and-a-half hours). The extended half-life of somapacitan allows less frequent (weekly) dosing."

He says that payers typically have prior authorization on somatropin, with "controls including diagnostic and lab values as prerequisites." A prescription from an endocrinologist is also a "common practice."
"Somapacitan is likely to be managed similar to all the other rhGH class of drugs," Tegenu says, adding that "it is reasonable to classify it as a second-line or nonpreferred agent whose use is allowed only after a trial and failure of or other medical reason for not using a preferred daily rhGH."
The graphic below show how treatments for growth hormone deficiency are covered among commercial health plans, health exchange programs, Medicare and Medicaid programs under the pharmacy benefit. 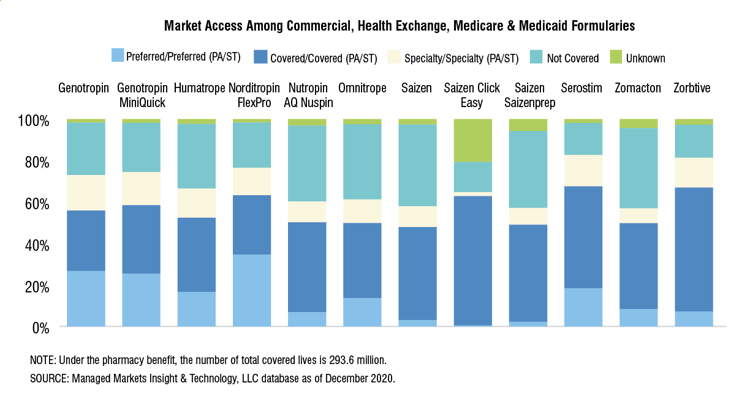