Thanks to recent regulatory moves and the increasing prevalence of copay accumulator/maximizer programs, the tactics that payers use to counter drug manufacturer copay assistance continue to be a controversial topic in the health care sector, AIS Health reported.

Copay accumulators work by preventing any monetary assistance that pharmaceutical companies offer commercially insured patients from counting toward their deductible or out-of-pocket maximum. Their close cousin, copay maximizers, take the total amount of a manufacturer's copay offset program and divide it by 12, and that amount becomes the new monthly copayment for all patients on any given drug over the course of a year.
From insurers' perspective, the goal of copay accumulators/maximizers is to help steer patients toward lower-cost drugs. However, copay accumulator programs have been fiercely criticized by the pharmaceutical industry and patient advocates, who argue that they lead to higher costs for consumers and thus limit access to life-saving medications.

Recent revisions to federal regulations may be contributing to the increasing prevalence of copay accumulators. In its Notice of Benefit and Payment Parameters (NBPP) for 2021, CMS allowed non-grandfathered group and individual market plans to use copay accumulator policies even when a generic equivalent to a drug isn't available.

A Feb. 23 analysis from Avalere Health also pointed to a December 2020 rule aimed at facilitating value-based contracts for prescription drugs in Medicaid managed care, which "created new risks for manufacturers when copay accumulator or maximizers are applied to their products.". 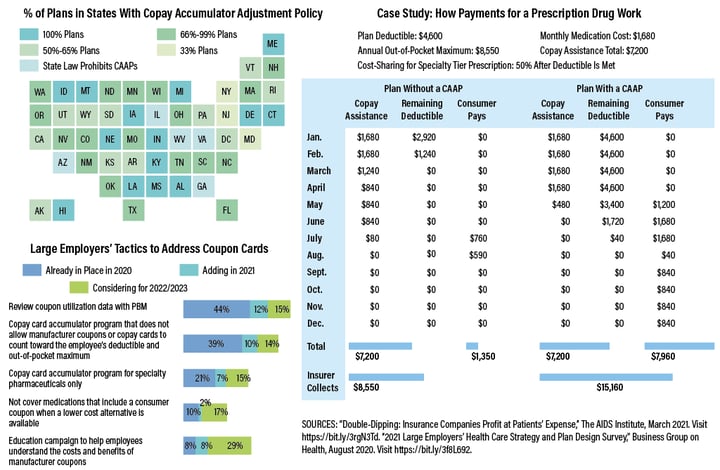