Trends That Matter for CAR-T Therapies

This summer, a drug called Tecartus (brexucabtagene autoleucel) became the third chimeric antigen receptor T-cell (CAR-T) therapy approved by the FDA. CAR-T therapies, which use a patient's genetically modified immune cells to target and fight cancer cells, are a cutting-edge type of treatment that comes with eye-popping price tags, ranging from $373,000 to $475,000. However, a new report from OptumRx highlights an "industry trend to watch" that could eventually provide some relief to payers worried about how to finance CAR-T treatments, AIS Health reported.

Currently, CAR-T therapies' high cost is at least in part attributable to the "labor-intensive and time-consuming" manufacturing process for such drugs, stated the UnitedHealth Group-owned PBM's Drug Pipeline Insights Report for the third quarter of 2020. Essentially, T-cells are taken from a patient, treated and multiplied in a lab, and reinfused into the same patient — a completely personalized process known as autologous therapy.
As the industry searches for a cheaper and more scalable way of manufacturing CAR-T treatments, a new approach known as an allogeneic process "is currently under study as one possible solution," according to OptumRx. In this process, previously extracted and banked healthy donor T-cells are multiplied "many times over for use in many patients," effectively spreading out the high initial manufacturing cost over multiple doses.

When asked how much the allogeneic process could reduce the manufacturing cost of CAR-T therapies, Bill Dreitlein, senior director of pipeline and drug surveillance at OptumRx, cited a 2019 study.

"Per the International Society for Cell and Gene Therapy, the cost to manufacture CAR-T using current methods is at $95,780 per dose," he says via email. "That study also calculates the production cost using the new process would be only $4,460 per dose — over 95% lower."

Tecartus' list price is $373,000, and the wholesale acquisition costs of the other CAR-T therapies, Kymriah (tisagenlecleucel) and Yescarta (axicabtagene ciloleucel), are $373,000 and $475,000 respectively, per the OptumRx report.
The graphic below show how Tecartus, Kymriah and Yescarta are covered among commercial health plans, health exchange programs, Medicare and Medicaid programs under the pharmacy benefit. 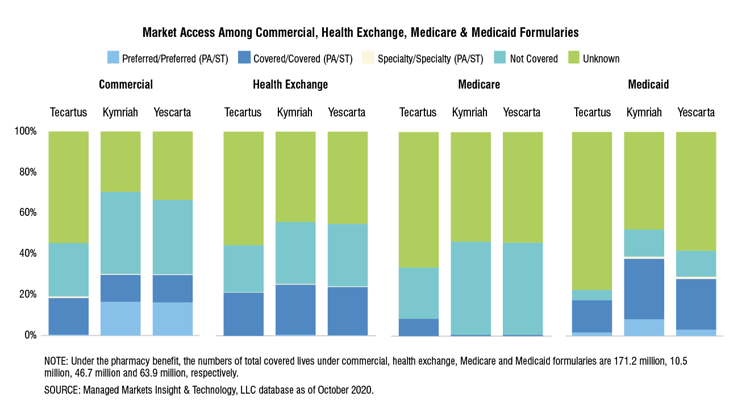