Centene Corp., which has come to dominate the Affordable Care Act exchange market by continuing to expand even when other carriers pulled back, is facing more competition now that the market has stabilized and insurer participation has increased, AIS Health reported.

Given that dynamic, Citi analyst Ralph Giacobbe advised investors recently that he was placing a "negative catalyst watch" on Centene due to the new competitive pressures it's facing. Centene, he observed, "was displaced as the lowest priced plan in a number of markets," and so the insurer "will have to rely on retention and new market entry to offset competitive pressures, which could prove challenging and may stunt growth relative to expectations."
SVB Leerink analyst Stephen Tanal, however, takes a more optimistic view. "I'm pretty comfortable saying Centene's likely to grow their overall HIX [health insurance exchange] earnings, because they're going to be in so many more places with higher premiums," he tells AIS Health.

According to Tanal's analysis, Centene is increasing its county-level, member-weighted bronze plan premium by about 4% and raising premiums across all metal levels by 4% to 6%. Centene is also expanding its geographic footprint next year, a move that Tanal estimates will put the insurer in 61% more counties than it covered in 2020.

But Tanal did notes that the exchanges next year will feature "more competition in the form of fewer monopoly markets and a larger number of local market competitors."

"It is definitely more competitive," Kathy Hempstead, senior policy adviser at the Robert Wood Johnson Foundation, says of the 2021 ACA exchange market. "There's more participants and it's not just the Medicaid MCOs spreading out into more places." 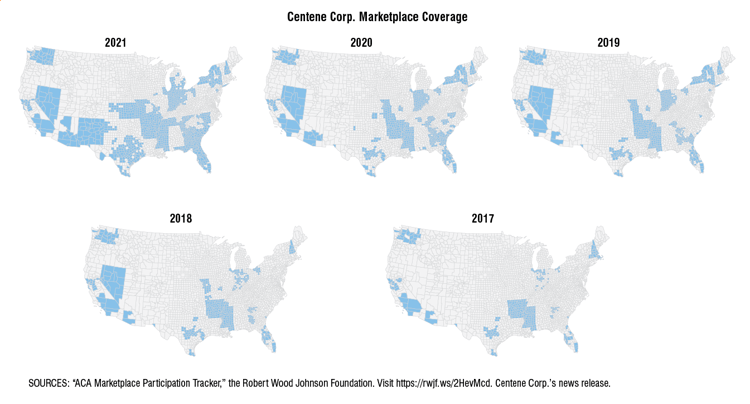